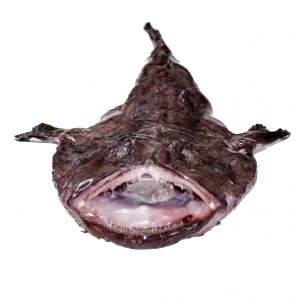 Monkfish can grow up to 200 cm in length and is a very distinctive fish, recognizable by having its head and body depressed, a wide mouth, broad head and a fleshy ‘lure’ at the end of its first dorsal spine, which is used to attract prey. The pectoral and ventral fins are so articulated as to perform the functions of feet, the fish being enabled to “walk” on the bottom of the sea, where it generally hides itself in the sand or amongst seaweed to catch its prey. Prey items are usually smaller fish (such as spurdogs, rays, sand eels, sculpins, sea snails, cod, whiting, pouting, haddock, flatfishes). But like most anglerfish, Monkfish are characterised by an enormously distensible stomach, which allows an individual monkfish to swallow prey fully as large as itself.

Monkfish are present in UK waters down to depths of 550 m. It is uncommon to see monkfish in water shallower than 18 m though it may migrate down to as deep as 2000 m in offshore waters in order to spawn. It is found mostly on sandy or muddy bottoms but is also present on shell, gravel and occasionally rocky areas. Monkfish occurs in coastal waters all around Britain and Ireland. It is predominantly recorded on the west coast of England, Wales and Scotland and the north, south and east coasts of Ireland.

It wasn’t so long ago that monkfish was referred to as the poor man’s lobster, the fine texture and sweet, light flavour of the monkfish tail recalling the crustacean’s. Now, if the monkfish doesn’t command prices equal to lobster, it exceeds it, making monkfish a delicious indulgence for diners and home cooks.
Cooking / Eating Benefits

Monkfish isn’t known for being the prettiest of fish, with its mottled skin, huge flat head and gaping mouth filled with menacing teeth. However the flavour of monkfish is delicious sweet, slightly buttery and about the closest fish comes to mea . As a result, it’s not cheap. Monkfish is available year round and is usually sold with the head removed; the remaining body being called the ‘tail’. Sold fresh the tail meat is usually skinned and filleted but meat can also be harvested from the cheeks. The loose dark skin of this fish is easy to strip away, revealing a pink, glassy membrane that needs to be pulled away – if left on it will shrink around the meat during cooking, making it tough.

The firm flesh of Monkfish is perfect for stir-frying, barbecuing and pan-frying as well as for use in ceviche or sushi. However Monkfish is a particularly wet fish and can excrete a milky-looking fluid when cooked. This is fine if being cooked in liquid but not so great on the grill. Salting the flesh or soaking it in brine for an hour then patting it dry before use will help.

Monkfish soaks up flavours well and robust flavours such as chilli, soy, sesame, curry powder, parma ham, chorizo and smoked paprika, all complement monkfish. A popular way of cooking monkfish is to wrap it in salty Parma-ham which not only adds great flavour but helps to keep the fillet nice and round whilst cooking.