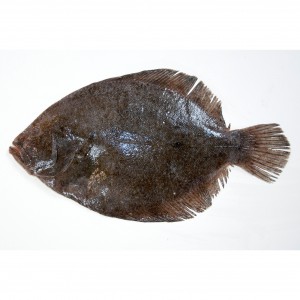 The turbot is a large, round left-eyed flatfish with a broad body 1.5 times as long as it is wide, usually 50-80 cm in length but occasionally grows up to 1 m. The skin bears no scales but scattered strong bony tubercles are present on the upper body surface. The lateral line is strongly arched over the pectoral fin.

Colouration is variable and the fish can change colour to match its background. It is usually a dull sandy-brown to grey, with minute brown, blackish or greenish specks scattered over the body and extending onto the fins. Turbot breed from April until August, laying their eggs predominantly on gravel bottom at depths of 10m. The eggs are planktonic and hatch after 7 – 9 days with the larva remaining in the pelagic zone for 4 – 6 months. Metamorphosis occurs at approximately 25mm after which they adopt their demersal life style. In general turbot migrate off shore with age. Tagging studies conducted in Sweden suggest that turbot move into breeding areas (which are shallower) during spring and summer to spawn and then return back to deeper waters in the autumn.

The word comes from the Old French tourbout, which in turn is thought to be a derivative of the Latin turbo (“spinning top”) a possible reference to its shape. Early reference to the turbot can be found in a satirical poem (The Emperor’s Fish) by Juvenal, a Roman poet of the late 1st and early 2nd centuries A.D., suggesting this fish was a delicacy in the Roman empire.

Turbot is a large, sandy-coloured flatfish that, alongside Dover sole, lemon sole, halibut, plaice and brill, is one of the most readily consumed flatfish in the UK. It’s fished in the North Atlantic and the Mediterranean Sea, and farmed in countries including France and Spain, but supplies are limited so it commands high prices, making it a luxurious option for restaurants and a treat for most households.

Turbot is well liked for good reason: one fish provides four decent sized fillets; the flesh – which is stark white and firm with large flakes – holds together during cooking; and it has a subtle taste-of-the-sea flavour. Turbot is available all year and can be bought whole, in fillets or as steaks. When cooking a turbot fillet, make sure that it has been pin-boned. Try turbot fillets steamed, poached or grilled and served with a simple sauce. Some French chefs lovingly sauce the turbot with lobster or mousseline. Aim for light sauces that don’t overwhelm, such as hollandaise, white wine, Champagne or something herby like parsley or dill. Because of its luxurious reputation, turbot will often be served with a lobster dressing or oysters. Other fitting accompaniments include roasted fennel, cauliflower and celeriac purée.