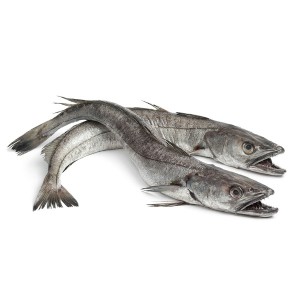 There are 12 species of Hake in total which are closely related to the Cod family. The European Hake is a thin blue-grey fish with a large black mouth lined with lots of pointy teeth. They can grow to over 1m in length and weight up to 10kg when fully mature. They are a demersal species that is usually found in deep waters (between 70-350 m) around the UK and Ireland. They generally feed alone on the seabed during daylight and move into mid-water to feed during darkness.

Adult hakes are unfussy, active predators, feeding on any small fish they can catch. They will happily eat mackerel, herring (hence the name herring hake), pouting, sandeels, squid, codfishes or any other fish they come across. They are not averse to hunting down smaller members of their own species. The young feed on crustaceans (especially euphausiids and amphipods). Hake are batch spawners releasing 2-7 million eggs at a time. They reach sexual maturity at around 3 yrs old and can survive 14 to 15 years in the wild. Hake often swim in small schools and show substantial offshore and along-shore migrations.

Hake is very swift fish with huge appetite. Researchers once discovered 75 herrings in the stomach of a captured hake. Natural enemies of hakes include Humboldt squids, sea lions, dolphins and dogfish sharks.

Spain has the highest consumption of hake in Europe, with a yearly consumption of 6 kg/person. This works out to around half all hake eaten in Europe. Though Spanish consumption of hake and other fish declined in the last decade, hake still accounts for about one third of total fish consumption there. Portugal, France, and Italy also eat a lot of hake whereas in the United Kingdom and Ireland hake are usually consumed in frozen fish fillets, fish fingers, fish cakes and other processed products. Hake stocks are heavily targeted by commercial vessels, especially with the decline of previously robust cod and haddock stocks. Although current hake levels appear to be holding up there are questions over the long term viability of hake numbers if commercial fishing is maintained at present levels. It’s best to check your hake has come from a sustainable fishery before buying.

Once cooked it has flaky white flesh similar to that of more expensive whitefish species such as haddock and cod but with a flavour that is more subtle than cod and sweeter. Spain and Portugal are the best places to look for hake recipes but being from the cod family it’s very easy to substitute hake in place of cod and haddock. The fish has a soft, iron-grey skin and silvery belly. The flesh when raw is naturally very soft, but when cooked it becomes firm and meaty. It doesn’t stay fresh for long though so it’s better to eat it as quickly as possible. As with all white fish hake is extremely versatile. It can be baked, battered or fried, used in soups and stews, served whole or is excellent for broiling in an oven or slow cooking on a grill.