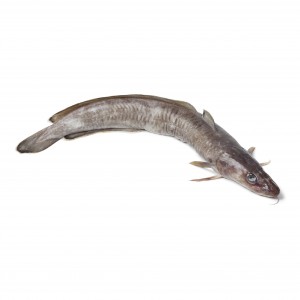 Ling is the largest fish of the cod family, growing up to 200 cm in length and 30 kg in weight. Ling is a deep water species found at depths up to 1,000 meters but juveniles and occasionally adults are found in water as shallow as 10 meters. This species is primarily solitary and bottom dwelling, lurking amongst rocks, crevices and wrecks in deep water. Ling is widely recorded around the British Isles, mainly off the south and west coasts of England, Ireland and the west Scotland.

Ling spawn in spring and are therefore less commonly caught at this time of year, but are caught fairly regularly throughout the rest of the year. Ling are slow growing and can up to five or six years to reach sexual maturity. Female ling will lay millions of eggs and once they have hatched the immature ling will live in shallower water for the first year or so, before heading to offshore waters where they live for the rest of their life. Once in deeper water ling will hunt any fish they can find such as herring and mackerel in mid-water, and cod, pouting and flatfish near the seabed. While fish make up the vast majority of the diet of a ling, they will occasionally eat crustaceans such as crab or lobster if this source of food is present. Generally, ling prefer hunting over and amongst rocky and broken ground, and are often targeted by charter boats over wrecks.

As Ling grow bigger, they tend to eat bigger fish, not necessarily larger quantities. They are lazy by nature and like to take life at an easy pace. They have even been known to snack on white plastic cups – as they look like a dead squid to a Ling and worth a speculative munch.

Ling is generally considered the poorer (or cheaper) relation to the cod. In the nineteenth century it was associated with the Irish immigrant community in the more impoverished parts of London. Salted and dried Ling was a staple of the markets in these areas, where it was popular with the poor, probably because cod was too expensive. Taste and texture wise Ling is similar to cod, just a little firmer and chewier. Usually available as fillets, ling requires its skin and pin bones removing either before or after cooking. It’s a versatile fish and works well in fish pies, soups and stews. Hugh Fearnley Whittingstall suggests that thick fillets of Ling, lightly salted and cold smoked for a good twelve hours or more, make a robust and satisfying alternative to smoked haddock, and can be the making of a fine chowder, tart or kedgeree.

As the Ling population doesn’t get the environmental or scientific attention of its cousin the cod, not much is known about current stocks in UK waters. However a line caught Ling from inshore waters caught outside the spawning period makes an occasional, seasonal treat.