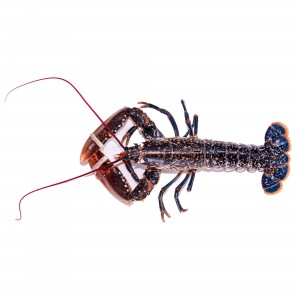 Lobster is a long-lived, large decapods crustacean found in Western Europe. Lobsters live for at least 20 and possibly up to 50 years of age and are big enough to be caught at around ages 4-8 years. Moulting may occur each year in smaller lobsters but less often as size increases. Octopus accounts as one of the few natural predators of lobsters. Egg production is size related and depends on the frequency of moulting. Eggs are then carried externally from September to April-May when hatching occurs.

Lobster larvae swim freely in the water column for about 30-40 days depending on temperature. Larvae occur mainly close to the surface where they can be preyed upon by seabirds and fish species inhabiting at the sea surface. They are the largest crustacean larvae in temperate waters and have strong swimming ability. They descend to the seabed at around 15 to 40 days old to settle into their appropriate habitat. Juveniles or adult lobsters do not undertake any significant migrations and juveniles in the first 3-4 years of life maybe particularly sedentary. Live lobsters are usually a greeny-blue colour and turn reddish-orange when cooked.

A lobster urinates from openings (nephrophores) located at the base of its second antennae. These excretory organs are called green glands and include a sac linked to a bladder by a coiled tube. Excreting from this part of the lobster is a mating ritual. Female lobsters seek out the most aggressive, dominant males in the area and show their interest by urinating repeatedly into the male lobster’s shelter. The female’s urine contains pheromones, which calm the male lobster down and get him in the mood for mating.

Until recently, lobster has been so eye-wateringly expensive that many Brits have still never tasted this sweetest and meatiest of shellfish. As the sea temperatures rise, lobsters are hatching earlier and are growing faster. The over-fishing of cod in the Atlantic means that fewer of these predatory fish are gobbling up baby lobsters. Bumper catches in North America and Canada in 2014 have put lobsters on the frontline of competition between supermarkets and are now available at a retail price as little as £5.99. This highly prized crustacean is no longer the preserve of the wealthy, and has suddenly and unexpectedly, become genuinely affordable. Watch out for quality though, this can vary depending on source. Local is better!

Males have denser, meatier flesh, but females have a more subtle flavour and an orange ‘coral’ roe that is often used to colour sauces. The best way to enjoy sweet lobster flesh is to cook them simply, either halved and grilled or baked, or boiled or steamed, and served with a butter sauce, lemon juice or mayonnaise.