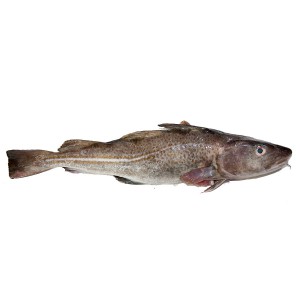 The Atlantic cod is a bottom dwelling species, distributed across continental shelves and the coastal waters of the northern North Atlantic and the North Sea. Cod prefers water temperatures from 2°C to 8°C and water depth from 10 m to 200 m. Cod are slow swimmers and within its geographical range cod is a generalist, both in terms of habitat use and diet. Cod can grow to 2 meters in length and weigh up to 96 kilograms. They can live for 25 years and usually attain sexual maturity between the ages of two and four years old. Cod has three dorsal fins, two anal fins and one pair of pectoral fins. It has beard-like barbel on the chin, which helps it to find food, acting like a sensory organ.

Its colouring is brown to green, with spots on the dorsal side, shading to silver ventrally. A yellowy stripe along its lateral line is clearly visible. Its habitat ranges from the shoreline down to the continental shelf. Several North Atlantic Cod stocks collapsed in the 1990’s and still haven’t recovered, even with new legislation and reduction in quotas. Many other cod stocks still remain at risk. The North Atlantic cod is labelled VU (vulnerable) on the IUCN Red List of Threatened Species.

Humans are the only natural enemies of adult cod and they can grow to an enormous size. The largest cod ever caught on record was off the coast of Norway in May 2013, weighing in at 103lb.

Cod is a key member of a whole family of fish including haddock, coley, pollock, whiting, ling and hake. Cod is one of the most versatile species of fish and popular as a food due to its mild flavour and dense, flaky white texture. Cod livers are processed to make cod liver oil, an important source of vitamin A, vitamin D, vitamin E and omega-3 fatty acids. In the United Kingdom, Atlantic cod is one of the most common ingredients in fish and chips (along with its cousins, haddock and plaice). Besides being an excellent low-calorie source of protein (a four-ounce serving of cod contains over 21 grams), cod contains a variety of very important nutrients and has also been shown to be useful in a number of different health conditions, especially heart disease.

Skin or pin-bone fillets either before or after cooking. The flaky flesh flesh works well poached, baked, fried or grilled and it also complements rich sauces. Cod is excellent in fishcakes, fish pies, tempura and chowder.